A Bit Smaller, But Still Impressive

The 1934 Goudey baseball card set was a fantastic follow-up to one of the most important and most popular sets ever issued, the 240-card 1933 Goudey Set. Goudey Gum continued to build upon the momentum and success of what made the 1933 release so successful.

Despite the success of baseball, the country was still struggling in the midst of The Great Depression. While the previous year's release was successful, many collectors simply did not have the few extra cents needed to buy these chewing-gum packs. Goudey reduced the size of the set to 96 cards and, unfortunately did not include Babe Ruth, who was playing his final season with the New York Yankees, in the set – although he would appear in the 1935 4-in-1 Goudey release. Goudey pulled back a bit on the production but still maintained that same card measurements of 2 3/8" by 2 7/8".

Unlike the 1933 Goudey Set, there are not multiple cards of the same players. The only player that has more than a single card is Lou Gehrig, who is featured on two cards.

Goudey scored a major win by prominently featuring "Lou Gehrig says..." on 84 of the 96 cards in the set in addition to displaying Gehrig on two cards of his own. Any set that included "Iron Man" had a leg up on gaining national acceptance, but this one had almost every card in the set tied to Gehrig. During the depression era, only Babe Ruth was more popular than Gehrig.

While the set does not include Babe Ruth, it still features 19 Hall of Famers (almost 20% of the set).

The 12 cards that do not feature "Lou Gehrig says..." are all National League players. On those, Gehrig is replaced by Hall of Famer Chuck Klein and the blurb, "Chuck Klein says..."

The Elusive Nap Lajoie is and isn't a 1934 Goudey

Several card producers of the era were infamous for using a common marketing ploy as they sometimes skip-numbered their sets or even short-printing a card or cards – forcing collectors to buy more and more packs trying to find the elusive missing card(s). The 1933 Goudey set took the short-printed card idea to a whole new level by never even issuing a single example of card #106 during the year.

Collectors wrote the Goudey Card Company to complain. Their letters were eventually rewarded when Goudey finally produced and sent them the long awaited card #106 in 1934. Card number 106 ended up being Nap Lajoie, a major star in the earlier days of the century. Although classified and cataloged as a 1933 Goudey, the Lajoie featured a 1934 design on the front, sans the "Lou Gehrig says..." banner and a 1933 style reverse. Unfortunately, many of the Lajoie cards that were sent were attached to the return letter with paper clip and the imprint was made some examples present with paper clip indentations.

All of the Hall of Famers, except for Kiki Cuyler, are found in in the first two thirds of the set. With this many future Hall of Famers, collectors were kept interested throughout the 1934 print run.

Several players in the 1934 set are depicted in the same pose that was used on their respective 1933 Goudey issue, including Hall of Famers Jimmie Foxx (#1), Charley Gehringer (#23) and Frank Frisch (#49), among several others. Some of these repeated images – like that of Mickey Cochrane (#2) – actually look more focused in the 1934 set than they did in 1933. Despite the fact that far fewer 1934 Goudey cards exist today than 1933s, virtually every player's card in the 1933 Goudey set is worth more than their 1934 counterpart. This is not uncommon as most player cards are worth more the earlier in the career that they're produced. 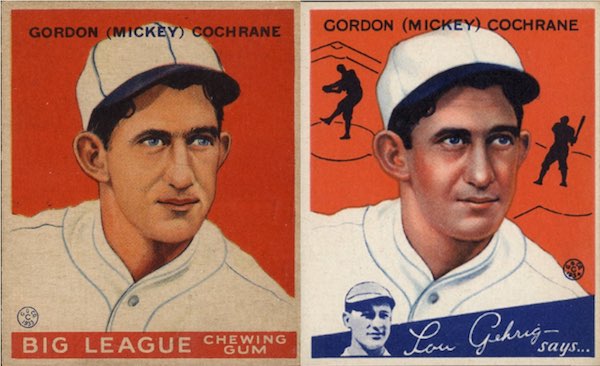 Here are the Mickey Cochrane cards from 1933 and 1934 Goudey. Notice the increased focus and detail in the '34 issue.

To date, more than 22,500 1934 Goudey cards have been graded by PSA and only 22 cards have garnered the PSA 10 GEM MINT grade, suggesting that top condition specimens are hard to find.

The lower number cards feature the most star power and seem to be the most plentiful in the hobby. Cards #49 through #72 seem to be the toughest while cards #73 through #96 seem to fall somewhere in the middle with respect to difficulty to locate.

Here's one 1934 Goudey collection that we purchased: