The Rise and Fall of the Local Baseball Card Shop

Almost 150 years ago, the first baseball clubs handed out carte-de-vistes to fans and opponents as mementos. From then until the early 1970s, the hobby of baseball card collecting remained relatively unchanged.

Collectors would collect and trade their cherished cardboard intensely, but eventually move on to another passion in life and leave their cards in small boxes in closets and attics. The cards would eventually meet their demise at the bottom of a wastebasket one way or another. 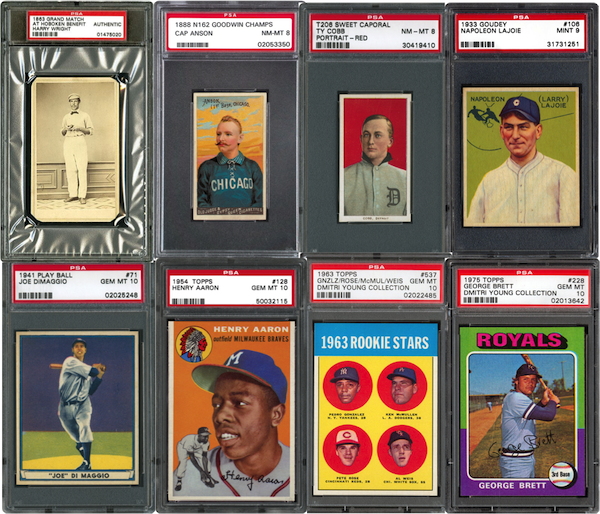 But by the early 1970s, the first professional card dealers emerged. They operated through mail order, from their homes by appointment only, placing classified ads in newspapers, and arranging to meet with sellers in person. The bravest of them opened up physical storefronts. 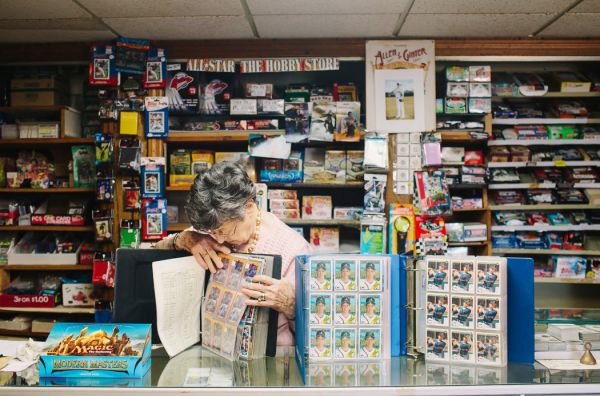 A small baseball card shop owner showing off some of her items --- Photo: NY Times

To older collectors, the opening of baseball card shops proved that their hobby, once dismissed as child’s play, had a place in their adult lives. To younger ones, these locations became places to paw through new packs and marvel at the vintage cards behind glass priced well beyond what their allowances could support.

The rise of the local card shop also proved to dealers and shop owners that plenty of demand existed for these establishments --- and that baseball cards were becoming a valuable commodity.

Card shops began opening with increasing frequency until the early 80s, when the floodgates officially opened. A few years earlier, Dr. Jim Beckett and Dennis Eckes published The Sports Americana Guide to Baseball Cards, which gave collectors a reference as well as the understanding about how much their cards were worth. 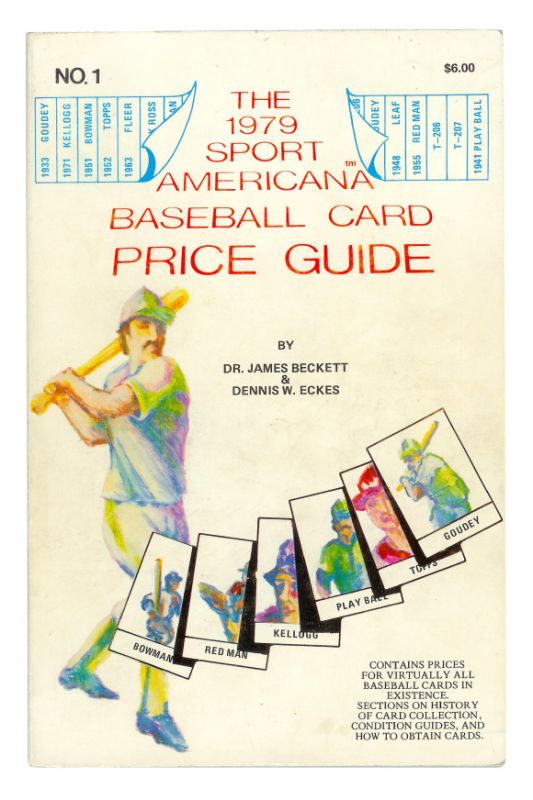 Collectors started pulling out their old shoeboxes and reintroducing their cards into the market via the local card shop. At the same time, a few well-financed dealers were buying up massive card collections from defunct manufacturers. Prices began to skyrocket.

Prices and demand for baseball cards continued to grow throughout the 80s. Shop owners were buying and trading with frequency and success. New markets emerged around speculation on rookie cards and collecting error and variation examples.

Card shops began popping up everywhere --- at the shopping center, the mall, the flea market, and any vacant storefront. Major card manufacturers took the opportunity to satisfy demand by producing record numbers of cards.

In 1986, an outstanding rookie class led by Barry Bonds, Bo Jackson, Will Clark, and Jose Canseco fueled a rush of card purchases. As collectors were (mistakenly) sure that these cards could only increase in value, manufacturers flooded the market.

Cards could soon be found on seemingly every counter top in the country from card shops to gas stations to grocery stores.

When Upper Deck issued its first set in 1989, their advertising emphasized their high quality: full-color pictures (front and back), glossy stock, five colors of ink, and a counterfeit-resistant hologram. They also claimed that they would be a limited production run. The higher quality and limited production would come at a higher price. For the first time, collectors had to pay a dollar or more per pack of current baseball cards. 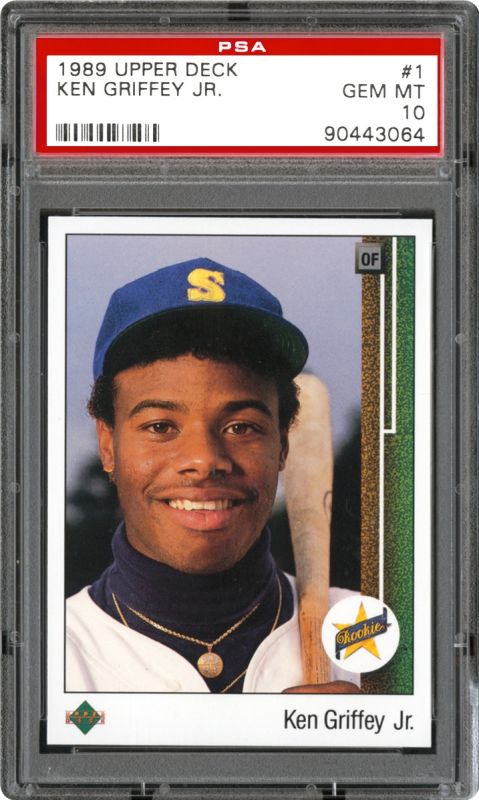 Somewhat surprisingly, and defying conventional wisdom, collectors responded positively. In the next few years, the other “established” card manufacturers like Topps, Fleer, and Donruss were improving the quality of their sets to remain competitive in an increasingly crowded market.

This modernized, more refined version of the traditional card renewed interest in collecting, but that interest would be short-lived. Manufacturers who let distribution run wild only a few years earlier were soon at it again. They tried to be more discreet about it, but no one was fooled. Card sets soon became “base sets” and “parallel sets” with the introduction of chase cards. Cards with pieces of memorabilia (bats, jerseys, ballpark seats, etc.) began to appear. Manufacturers sent different types of card packs to retail outlets and to hobby shops. Autographed cards and redemption cards were also introduced.

This 1990 Upper Deck Reggie Jackson card is credited as the first ever autograph card inserted into packs. It was limited to 2,500 copies.

As the new material flooded the market, collectors started getting frustrated and turned off of the hobby. Many stopped collecting new cards altogether and instead concentrated on building older sets. Younger collectors who lacked the disposable income to justify spending up to $10 for a pack of eight cards often chose to stay away. Buying cards began to take on the feel of playing the lottery. You paid five or more dollars for a pack and hoped you’d land a valuable autograph or memorabilia card. If you did, you’d sell that card for $20 and discard the rest.

Thus, card collecting became less of a hobby and more of an investment/gamble. Those remaining card shops, lucky enough to have weathered the refractor and game-used storm, quickly realized that there were far fewer card investors than pure hobbyists.

The final blow came with the advent of the eBay age. Almost overnight, collectors gained unlimited 24/7 access to nearly every card they could possibly imagine at the price that the market determined --- not their local shop owner. With their overhead and limited reach, the local card shop couldn’t compete.

Nowadays there are but a sprinkling of card shops still left across the country. Most will probably be gone in the next few years. As they struggle to survive, few of them have the resources to purchase cards from customers let alone offer them fair market value. They exist mainly as a retail outlet for card and generic memorabilia manufacturers.

Today, revenues from new sports cards have dropped to roughly $200 million per year, about one seventh of their peak in the early 90s.

While this may be upsetting for the nostalgic collector who longs for the days of spending an afternoon sifting through packs and chatting about the hobby, there is good news. The reality is there has never been a better time to maximize the value of your collection. eBay and other online auction houses have made the card market as hot as ever and determined collectors are still paying top dollar for fresh, high quality material. While the brick and mortar baseball card establishment has come and gone, they hobby is alive and well. 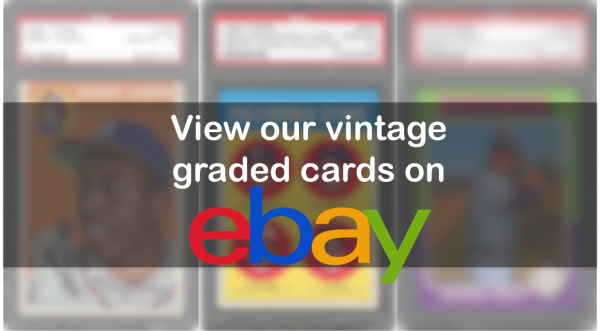 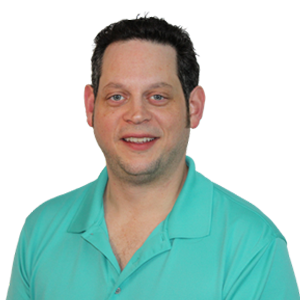 Leighton Sheldon is the President of Just Collect. Before starting Just Collect, Leighton worked as a financial analyst for Johnson & Johnson and Director of Acquisitions for Leland's Auctions. An avid collector, he focuses his own collection on vintage basketball cards and memorabilia. He is also a die-hard Yankee fan.

Just Collect is always buying sports cards from 1879 to 1979. You can get a free appraisal right here on our site. You can also contact Leighton directly at leighton@justcollect.com