From barstools to high school cafeterias, living rooms to locker rooms the endless debate over "the greatest of all-time" has only gotten more heated as the Hall of Fame career of Kobe Bryant comes to a close and LeBron continues to dominate the game. Their other-worldly skill sets, scoring prowess, and athletic ability are, without fail, always put up against those of Michael Jordan and from there the argument ensues. Jordan had the killer instinct. Kobe has the better all-around offensive game. Lebron is just bigger, stronger, and faster. It goes round and round and round until, as someone always does, drops the word "RINGS", as in how many pieces of championship jewelry each player owns. In an instant the stat dropping comes to a screeching halt and a hush falls over the room as those in Camp LeBron (two rings) and Camp Kobe (five rings) have to temporarily concede to the gloating Jordan fan, who, along with MJ's six titles, triumphs again this day.

But doesn't this strike anyone else as being odd? If the number of rings is the true measure of "the greatest" then why is it that the conversation only seems to ever involve these three men? For that matter, why is this even a conversation at all? There is only one man who flaunts more hardware than nearly all of those superstars combined. One man who revolutionized the way the sport was played long before the days of multi-million dollar endorsements and espn. That man was Big Bill Russell of the Boston Celtics. Winner of five regular season MVP awards (1959, 1961-63, 1965), three time member of the All NBA First Team (1959, 1963, 1965) and eight Second Teams (1958, 1960-62, 1964, 1966-68), twelve-time NBA All-Star (1958-1969), two-time NCAA champion, Olympic gold medalist, and owner of eleven, yes eleven, NBA Championship rings.

Maybe it was due to the lack of television coverage or maybe the sport was still just a bit too young when Russell ruled the court or maybe the bias against big men is more real than imagined. Whatever the reason, the resume doesn't lie. He may not have been the flashiest and his scoring numbers don't pop off the page the way his rebounds and blocks do, but if you and your buddies are going to have a serious debate over the greatest PLAYER, not scorer, of all time then Bill's name must be included.

There is some good to come from this lack of recognition though. Cards featuring Bill can still be had at relatively reasonable prices allowing plenty of room for return on investment in the coming years as the former Celtics center continues to gain the respect he deserves.

By far the most sought after of that group is his 1957 Topps #77 rookie card, his only recognized rookie card and the key to the star studded '57 set. It fittingly features Russell in a defensive stance dishing out some of his signature man-to-man shutdown D while a complete lack of any background scenery allows his figure to be viewed almost completely free of distraction (although with lighting like that in a gym it had to be tough to find the basket). Very minimal red and yellow graphics framing his name and team complete the front side of a card that notoriously plagued by print marks and centering issues. On back are the statistics from his only season and his bio alongside an illustrated character and measuring tape marking off his height. Just as with the other cards in the set, it is extremely difficult to find in high grade condition and as such prices are getting well into the five figure range. 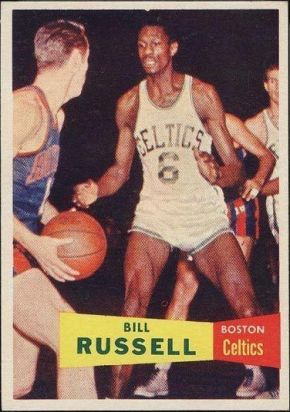 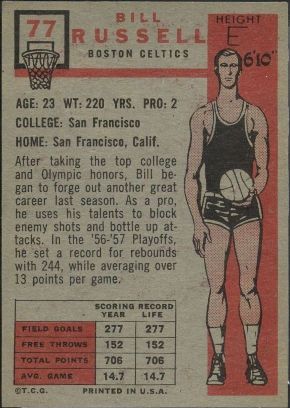 There are number of other options for Russell fans that span both the decades and the cost spectrum, even if his RC falls outside of your budget. Here are just a few that we like:

Four years would pass before another Russell offering would be made available and it would mark not only just the second of his thirteen year career but sadly his last major release produced during his playing days. As in '57, Bill's Fleer #38 was once again the centerpiece of a historic set packed with Hall of Fame rookie cards, including Wilt Chamberlain, Oscar Robertson and Jerry West. The cards iconic design, setting bold colors over black-and-white photo, makes for a fitting sendoff but does little to compensate for the overall lack of Russell cards from his era. It was just one of the unfortunate results of the sports fledging popularity at the time. 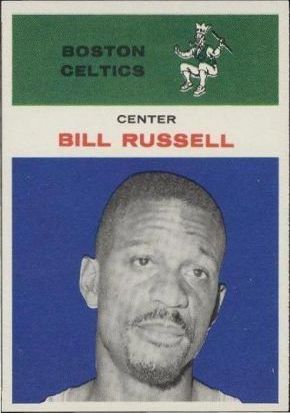 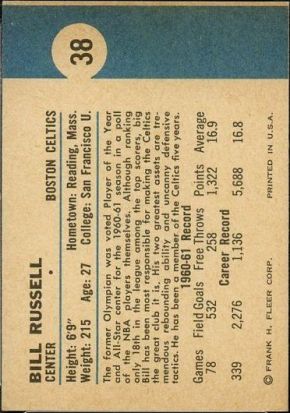 The counterpart to Bill's base card in the set shows him gliding through the air in all of his cat-like gracefulness as part of the 22-card In Action series. The third and final piece of the trio issued during his dynasty-leading glory days. High grade examples of these cards can still be had at a reasonable price and collectors not overly concerned with condition could find themselves a very attractive specimen if they're willing to overlook some centering issues. Either way this card is a "must have" is you've already crossed the first two items off your list. 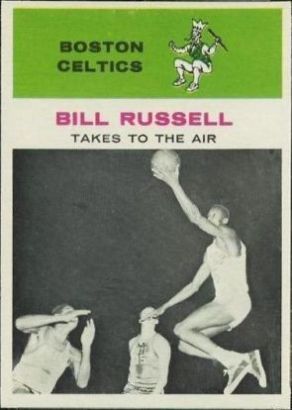 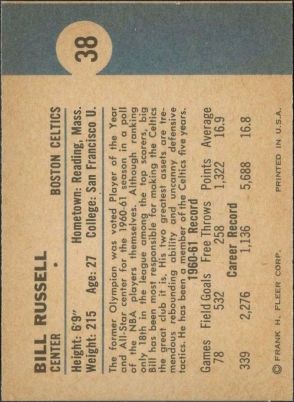 Despite being burned by the basketball market in a fashion similar to Ehlo vs MJ, Topps sensing a turn in the tide, decided to dip their toe in the water again near the close of the decade with the 1968-69 Topps Test set. A twenty-two piece collection done in minimalistic style with simple black-and-white cards that delivered massive star power. Top to bottom those names included Wilt Chamberlain, Hal Greer, Chet Walker, Bill Russell, John Havlicek, Cazzie Russell, Willis Reed, Bill Bradley, Odie Smith, Dave Bing, Dave DeBusschere, Earl Monroe, Nate Thurmond, Jim King, Len Wilkens, Bill Bridges, Zelmo Beaty, Elgin Baylor, Jerry West, Jerry Sloan, Jerry Lucas and Oscar Robertson. Fifteen Hall of Famers in all, who along with the rest formed a massive image of "The Stilt" when their backs were puzzled together. While all rare in their own right, Russell's #4 is by far the most difficult to find.

Thankfully the set's reception was positive enough to convince Topps that the time was right to get back in the game and the following year they treated us to the complete collection of their now famous "Tallboys".

The fact that we've included such an obscure card on this list speaks to how hungry card collectors are for more vintage Russell. The Seattle SuperSonics release from Shur-Fresh Bread was distributed just as he took the reins as their new head coach and though he didn't experience the same success the opportunity allowed the production of a card that has clearly become the a budget-friendly alternative for Bill Russell collectors. Examples with the bread tab still attached are more desirable but consider yourself among the fortunate if you're able to sniff one of these out.

Another twenty years would pass before Russell's image would grace another card and this time it would be joined by his Hall of Fame autograph. Action Packed, one of the many card manufacturers on the NBA bandwagon in the early 1990's, produced a brief run of Hall of Fame basketball products, most notable of which was their 1995 Action Packed Hall of Fame, which included one HOF signature redemption card per box. Bill's gold foil card was limited and hand number to 500 in silver and lead an impressive pack of players and coaches including Nate Archibald, John Wooden, Red Holzman, Nate Thurmond, Dolph Schayes, and Bill Sharman.

This final piece may be a modern but it has undeniable historic value. Not only does the UB Black Octo Autographs card include the silver signature of Bill Russell but that of Michael Jordan, LeBron James, Magic Johnson, Larry Bird, Julius Erving, Kareem Abdul-Jabbar, and Hakeem Olajuwon. With only 10 of these in existence, tracking one down will be no small task and the price will certainly be steep but if you have the time and the budget to go after any of these gems, then we wish you the best of luck! Happy Hunting!

Have more questions about Bill Russell or his cards? Looking to sell your collection? Contact Just Collect today to get more info.