World War II had a massive effect on the card collecting hobby and industry, especially hockey. The production of hockey cards was shut down completely from 1939 until 1951, until an Ontario-based company called Parkhurst produced a hockey set in 1951. This was the first major set of hockey cards to hit circulation since the war had started, following the 1939 O-Pee-Chee set.

For three years, from 1951 to 1953, Parkhurst was actually the primary hockey card company, as Topps didn't get into the rink until 1954.

There were only 105 cards produced for the 1951 Parkhurst set, which doesn't seem like a lot, but that's because back in 1951, there were only six teams in the NHL: the Detroit Red Wings, Chicago Blackhawks, New York Rangers, Boston Bruins, Toronto Maple Leafs and Montreal Canadiens. Those six teams are now referred to as the "Original Six," and were the only teams in existence in the NHL until the expansion season of 1967.

One thing that is a bit different about these cards is the actual size of them, measuring in at only 1-¾" by 2-½" - which is much smaller than the standard 2-½" by 3-½" size of cards we're accustomed to. What's also neat about these cards is all of the information found on the front. Just underneath the full-color photo of the player, you have everything from his name, to where he was born, to his stats from the previous year - information that is usually reserved for the back of the card. But the back of the cards are blank, so this information had to go somewhere! 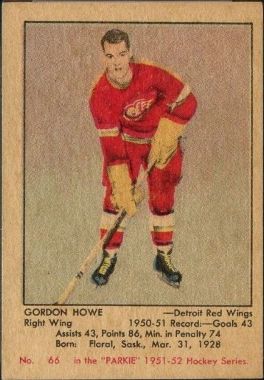 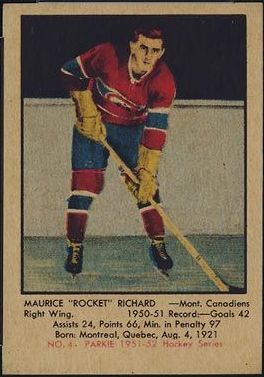 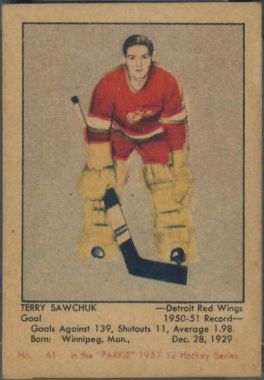 Generally, a rookie card is from a player's first season in the league, however, this set strays from the norm. Since this was the first time hockey cards were being printed in well over a decade, this was the first card for many (30) different players featured in the set, meaning it would be their rookie card, even if they had been in the league for quite some time. Take that season's Most Valuable Player and league leading scorer, Gordie Howe of the Detroit Red Wings. Howe, who is considered by many as one of, if not, the greatest hockey player they ever saw, was already in the league since 1946. Yet, his first card ever made was from this 1951 Parkhurst set, and because it's his first card, it's his rookie card, and it's worth a good chunk of change. The price of the Howe card is also driven up by it's rarity, as there are less than 500 examples rumored to be in existence, and only three of those example has ever graded out higher than a PSA 8 NM/MT. The one and only PSA 9 example has never been sold publicly, so the true value of mint is unknown. One of the two PSA 8.5's has actually sold, and that was for $26,300 in 2013 (eBay) . PSA 8 examples don't hit the auction block that often either, as the most recent one sold for just over $17,000 on eBay back in October of 2015.

The Gordie Howe card one is by far the "Babe Ruth" of the set because he was the best player in the league at the time, and probably the best player of that generation. So that explains why the value of his card is worth three times more than the  next best card in the set, which is of Montreal Canadiens forward Maurice "Rocket" Richard, another great Hall of Fame player.

Richard's card, which is also considered a rookie card, is coveted in high-grade. Out of the 300 or so that have been slabbed by PSA, only a handful have come back as being in Mint condition, thus driving up the value of all high-end examples. PSA 8 examples are worth between $7,000 and $8,000, and a PSA 9 example sold for $30,100.00 in 2013. Again, not as high of a value as the Howe rookie card, but because Richard is another Hall of Famer, who helped Montreal win eight Stanley Cup titles (five straight from 1956-1960), his card is definitely the next best card of the set after Howe. After Howe and Richard, Howe's teammate and goaltender Terry Sawchuck rounds out the Parkhurst "Big Three" as the best and most valuable cards of the 1951 set.

Aside from the Howe, Richard and Sawchuk card, there are a few other cards in the set worth mentioning: Ted Lindsay, Doug Harvey, Bernie "Boom Boom" Geoffrion, and Red Kelly. Although not as valuable as any in the Big Three, these Hall of Famers still hold a pretty significant value to the hobby. Most high-grade examples of these fellas are worth well above $1,000. But hang on, there's one card in this set that's worth even more than some of these Hall of Famers, and it's a rare non-single player card in the set. Card #52 in the Parkie set, which is an action shot of the winning goal from the 1951 NHL Stanley Cup Finals, features Toronto Maple Leafs' Bill Barilko scoring on Montreal Canadiens goaltender Gerry McNeil. That card, with a PSA grade of 9, is worth over $5,000.

It's not everyday that you come across a set that's comprised of thirty rookie cards and Hall of Famers, and also includes one of the best players of all-time.  Which is why collectors from all over the world are trying to get their hands on a complete set or high-grade singles. A complete set in decent condition can be worth over $5,000 - so if you have one, give us a call! We'll be more than happy to provide you with a free apprasial.