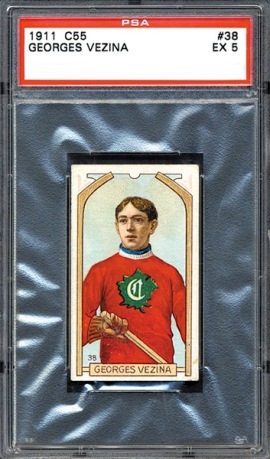 While the catalog numbering may be confusing, the 1911 C55 Set was issued a year after the 1910 C56 Imperial Tobacco Hockey Set. The 1911 C55 Imperial Tobacco Hockey Set is very similar in appearance to the previous incarnation, albeit expanded by another 9 cards to reach a final size of 45 cards (46 if you count both Walter Smaill variations). Similar to the the T-series baseball cards, they have the same dimensions, 1 1/2" by 2 5/8". But unlike many of the tobacco era sets, the C55 cards are numbered and lack any advertisements on the back. Of the three major C-series hockey sets of the era, this is considered to be the easiest to complete even though it contains the most expensive star cards.

The obverse (card front) features a lithographed player image. A box below the player contains his name and graphic hockey sticks on each side form part of the picture's border. A card number appears in a lower corner. Backs feature an ornate design, with a "Hockey Series" designation on top and a card number inside a circle at the bottom. The player's name and a rundown of his teams appear in between.

It is widely believed that C55 issue was issued by Imperial Tobacco, even though the cards don't indenitify the manufacturer. The set is considered complete at 45 cards, but there are two variations of card #27, Walter Smaill. One version presents with Smaill's right hand is on the hockey stick while the other shows his right hand on his hip.

The key card in 1911 C55 Hockey features Georges Vezina and is one of the legendary cards of the hockey hobby. A few of the other very desirable stars include Art Ross, Newsy LaLonde and Fred "Cyclone" Taylor.

Although this may be considered the easier of the "C" Series sets to complete, that does not mean that they are easy to find in high grade.  As of Jan 1, 2019, there have been just over 5,800 C55 cards graded in the PSA Population Report.  A scant 2 cards have grade PSA 9 with ZERO PSA 10 examples.  In fact, there are less than 100 cards that have even been graded PSA 8!

Three of the key cards of the set, E.D. "Newsy" Lalonde, Joe Malone, and Georges Vezina. All three were inducted into the Hockey Hall of Fame.

Just Collect, Inc. is always looking to purchase hockey cards and sets. Our staff of well informed, customer service representatives are ready, willing and able to help you with any sports card questions that you may have. Additionally, Just Collect's experienced sports card specialists can answer most of your detailed or specific questions. When you finally decide it's time to sell your cards, give us a call!