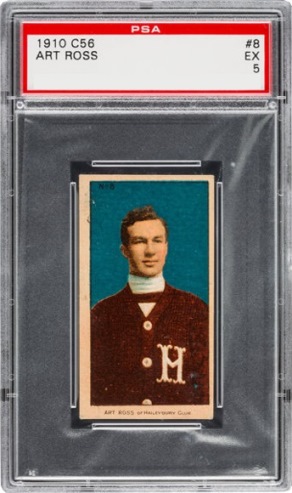 Although the NHL did not yet exist, in only their second season, the National Hockey Association was highlighted as 36 players were featured on the first major set of hockey cards issued with cigarettes. This league directly preceded the NHL from 1909 through 1917. During the league's second season in 1910-11, the cards appeared and offer a glimpse into what was still an evolving game.

1910 C56 Hockey cards measure 1 1/2" by 2 5/8" and feature a lithographed player picture with a white border. The player's last name and team appear in the border area below the picture, while a card number appears in the upper left corner. Backs feature a "Hockey Series" design with two crossed hockey sticks and a puck, followed by the player's name, team and a history of his past teams.

Although there is no advertisement on the cards, it is generally accepted that they were produced and issued by Imperial Tobacco. There are 36 cards in the complete set, which is considered to be slightly more scarce than the C55 set.

The 1910 C56 Hockey features a bevy of Hall of Famers. These early hockey legends are:  Frank Patrick, Percy Lesueur, Art Ross (two cards in the set), Fred "Cyclone" Taylor, Lester Patrick, Paddy Moran, Ernest Johnson, Bruce Ridpath and Newsy Lalonde.  That's 9 players (10 cards) out of the 36 subjects that are in the Hockey Hall of Fame. How's that for a loaded set?

As of Jan 1, 2019, there have been nearly 2,800 C56 cards graded in the PSA Population Report. A solitary exapmple has been awarded the grade PSA 9 with ZERO PSA 10 examples. In fact, combined, there are less than 100 cards that have even been graded PSA 7 or better. 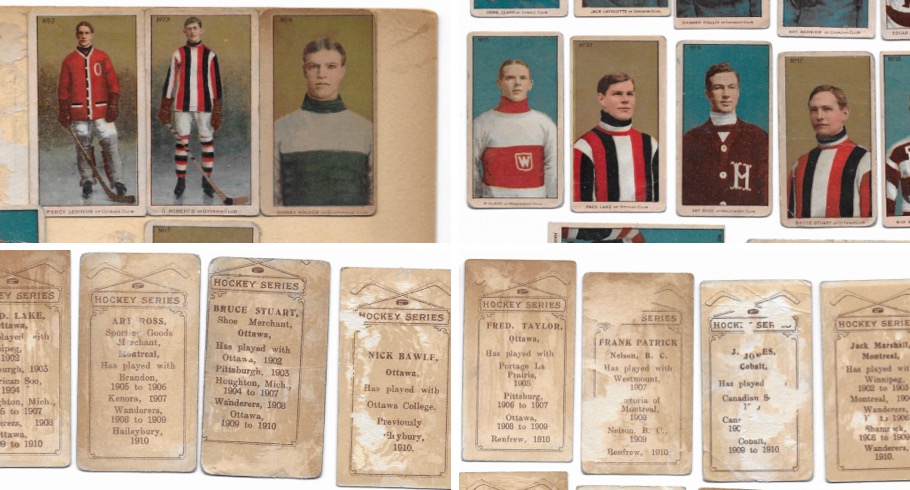 Here's a C56 Hockey Card Collection We Purchased in 2017

We are always looking to purchase hockey cards and sets. Our customer service representatives are ready, willing and able to help you with any sports card questions that you may have. Our experienced sports card specialists can answer most of your detailed or specific questions. When you finally decide it's time to sell your cards, give us a call. Thanks for reading.