The Bowman Gum Company had the rights to produce trading cards of professional football players in the late 1940s and early 1950s. Looking back at their succession of sets, it appears as though it took Bowman several seasons to determine what features most pleased football card enthusiasts. The 1948 set was smallish (2-1/16" x 2-1/2"), limited in number (108 cards) and black and white. Though still small in size, the 1950 set improved a bit by going with color images and expanding the checklist to 144 cards.

In 1951, Bowman put together its finest football series to date. While the checklist stayed at 144 cards, the size of the cards was expanded to 2-1/16" x 3-1/8". Card fronts featured beautiful color images, mostly in action, surrounded by a crisp white border. An additional touch of artistic genius came in the form of color team logos set slightly above white boxes containing the player's names. The overall effect is a timeless look that simply oozes a vintage football feeling. Card backs are oriented vertically, with the player name and "FOOTBALL" printed in red on grey stock. The remainder, which includes vital information, a brief biography, card number and Bowman copyright are done in blue.

The 1951 Bowman cards were originally available in six-card nickel packs, and single-card penny packs. Both included slabs of gum. It is believed that the cards were printed on four 36-card sheets. As a result, the set contains no short prints; the entire set was released in a single series. 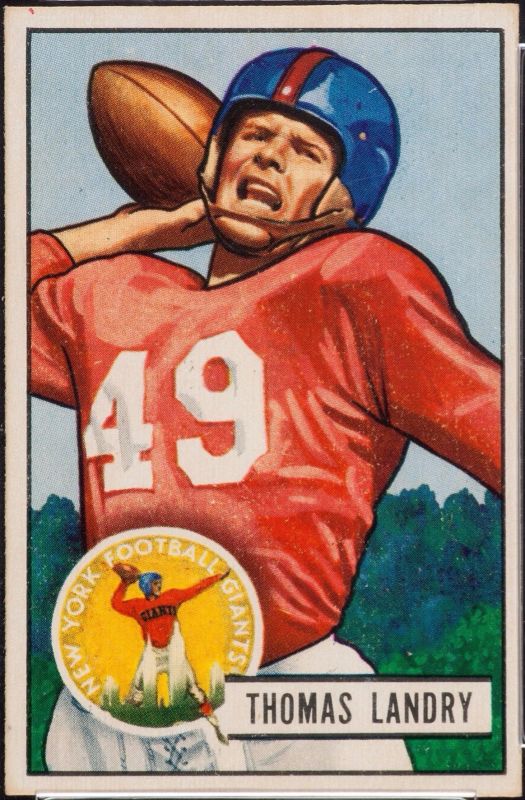 While there is little debate as to the attractiveness of the 1951 set, it remains one of the least popular of the Bowman football sets among collectors. The reason appears to be a lack of rookie star power in comparison to the Bowman sets of 1950 and 1952. Still, six hall of fame members made their cardboard debut in the set, Norm Van Brocklin (#4), Tom Landry (#20), Arnie Weinmeister (#21), Lou Creekmur (#62), Emlen Tunnell (#91) and Ernie Stautner (#96).

Additionally, the 1951 Bowman set is notoriously tough to find in top grade. Of the nearly 19,000 '51 Bowman cards graded over the years by PSA, just over 400 have been graded PSA 9. In fact, as of this writing, the following 13 cards do not yet have a PSA 9 example:

The two most popular cards in the set are the Norm Van Brocklin (#4) and Tom Landry (#20) rookies. Van Brocklin made his name as a player, and is shown as such in his card. Landry, on the other hand, went into the Hall of Fame as a coach. Still, both cards command significant prices when high grade examples are brought to auction. The most recent public sale of a PSA 9 Van Brocklin occurred in 2014, and sold for $8,043. Tom Landry is a rare case in this set in that there are two PSA 10 Landry RCs in the PSA Population Report, the most recent sale of which brought in $22,100 in a June 2016 eBay auction. For the purpose of direct comparison, the most recent PSA 9 Landry sold for $4,483.92 in 2014.

There are two error cards in the 1951 Bowman series, although neither card was issued in a corrected version. Card #11, Al Wister, mistakenly tags his with the nickname of "Whitey." "Whitey" actually referred to Wistert's brother, Francis. Al was known as "Ox."

Just Collect, Inc. is always looking to purchase 1951 Bowman Football cards, as well as other vintage sports cards. Our staff of well informed, customer service representatives are ready, willing and able to help you with any sports card questions that you may have. Additionally, Just Collect's experienced sports card specialists can answer most of your detailed or specific questions. Call us today! 732-828-2261 or drop us an email.