Unlike their baseball counterparts, trading cards of professional football players were issued sporadically over the first several decades of the NFL's existence. In fact, early nationally-distributed sets contained a just a handful of cards featuring football players, therefore the 1935 Chicle set is generally considered to be the first major all-football trading card set of NFL players. Another dry run immediately ensued after the Chicles, and it was not until the Bowman Gum Company produced their first football set in 1948, that nationally-distributed football cards became something for children to purchase each autumn.

While not as flashy as the Chicles with their colorful, art deco style, the 1948 Bowman Football set had a greater player selection, and featured real photographs on card fronts surrounded by a simple colorless border. Card backs feature the player's name, position, team and biographical information in black print, with the card number and various mail-in premium offers printed in red. The cards measured 2-1/16" x 2-1/2" inches.

There are 108 cards in the 1948 Bowman Football set. The set was printed in 36-card sheets, and the third sheet contained all of the cards with numbers divisible by three (cards no. 3, 6, 9, etc.). All of these cards are considered short prints, making a full third of the set more difficult to obtain than the rest. The PSA Population Report bears this out as the third-series cards have generally been graded in smaller quantities than the others.

The cards are believed to have been distributed in penny and nickel packs with a slab of gum. 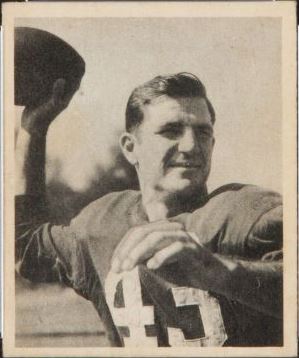 As it was the first major football set in 13 years, nearly all of the cards in the set have been designated as rookie cards. In fact, of the 108 cards in the set, only card #57 John Badezewski does not carry the "RC" designation in the annual Beckett guides. Understandably, 1948 Bowman Football contains rookie cards of no less than 10 future members of the Pro Football Hall of Fame. This point makes the cards popular not only with set collectors, but also with Hall of Rame rookie collectors in both autographed and non-autographed forms. Washington Redskins legend Sammy Baugh (card #22) leads the rookie card crop, and his card's importance is reflected in the PSA Population Report. Far more Sammy Baugh cards have been submitted for grading (about 400) than any other card in the set. Results show the card to be extremely scare in top grade, with only three graded PSA 9, and none graded PSA 10. There have only been three public auction sales of the Baugh in a PSA 9, with the most recent in April of 2015, which closed at $6,909.00 (eBay). Before that was in August of 2014, which sold for $4,626.72 through Mile High Auctions. You have to go back all the way to September 2009 for the first (internet recorded) public sale of Baugh in a PSA 9, which went for $6,551.80 in Goodwin's auction.

As would be expected, the first and last cards in the set are difficult to find in high grade, although the last card, Buford Ray #108, is much more difficult to locate than Joe Tereshinski #1. A four-row uncut sheet has proven the Ray card to have been located in the final spot on the third row of the sheet, a position susceptible to miscuts and other forms of damage. As a result, PSA 8 is the highest grade given thus far to any Buford Ray card, and the quantity of those remains in single digits. The lone public sale of a PSA 8 Ray occurred in 2014, when Mile High sold one at auction for $1,827.36. Tereshinski cards are somewhat less of a challenge, as there are a few 9s in the hobby, and several 8s. These have traded in the $2,300-$3,900 (PSA 9) and $251-$510 (PSA 8) ranges.

There are no known error cards in the 1948 Bowman Football set. An album was printed to house the cards, and offered as a premium in exchange for card wrappers.

Just Collect, Inc. is always looking to purchase 1948 Bowman Football and other vintage football cards (pre-1970). Our staff of well informed, customer service representatives are ready, willing and able to help you with any football card questions that you may have. Additionally, Just Collect's experienced vintage card specialists can answer most of your detailed or specific questions. Call us today 732-828-2261 or drop us a line.