National Chicle Co.'s "Football Stars" inaugural release in 1935 consisted of 36 cards, each of which measured 2-3/8" by 2-7/8." The images consisted of artistic renderings enhanced by Deco-art stylings similar in design to the 1934-36 Diamond Stars baseball set that was also produced by the company. Peppered with the era’s biggest names like Bronko Nagurski, Knute Rockne, Cliff Battles, Dutch Clark and Ken Strong, the National Chicle issue did not disappoint as the first professional football card set. The inclusion of Turk Edwards, Shipwreck Kelly and Beattie Feathers only adds to the star power of the issue.

Originally issued as a set of 24, Chicle expanded the release by another dozen, with the latter high number series including the coveted card #34 card of Bronko Nagurski. Although the entire set is rather scarce, the short-printed Nagurski is widely acknowledged as the most valuable and desirable football card of all. Other key cards include the #1 Dutch Clark’s card and #36 Bernie Masterson as the final card of the 12-card high number series. As the set's first and last cards, these examples typically fell victim to excessive wear from rubber banding or exposure to the elements. The reverse of the cards are unique to the day, with football playing tips instead of statistical information. Considering that the back of the cards state “one of 240 players with playing tips,” it is possible that the set was intended to be 240 cards, instead of the eventual final tally of 36 cards. In the football world, one card often draws comparisons to the famous T206 Honus Wagner. Bronko Nagurski's 1935 National Chicle RC is probably the 'Holy Grail' for collectors of pro football cards. The 36-card National Chicle Football issue was the first professional "football only" set ever made, and Nagurski is the clear gem.

Bronko Nagurski was one of the earliest stars in the NFL. During an era where players took both sides of the field, Nagurski was a force to be reckoned with, destroying opponents as a defensive end and carrying defenders as a running back. During his career, Nagurski would win two NFL championships and would be regarded as one of the greatest players in NFL history. In 1935, National Chicle began inserting football cards into their packs of gum. The 36-card set that Chicle produced is rare, and many of the cards from the set are heavily desired by collectors. Bronko Nagurski’s rookie card from the 1935 National Chicle Set is by far the most valuable card in the issue, and the most valuable football card in all of sport card collecting when found in high grade.

The demand for high grade, high profile cards has not been lost on football collectors and investors. The only PSA 9 Mint example of Bronko Nagurski sold in 2006 for $240,000 and then, in 2011, the same card sold for $350,000. In today’s market, could it reach or exceed $500,000? Additionally, there are only a couple of PSA 8’s in the marketplace and they are probably ready to eclipse the $100,000 threshold if/when one finally comes to market. Even lower grade examples bring several thousand dollars and up. 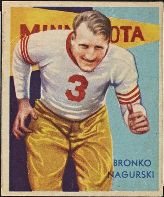 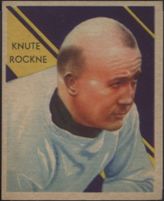 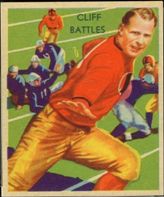 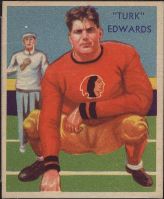 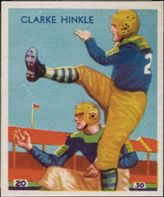 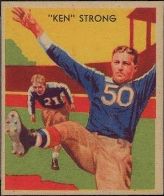 The only non-professional player included in the set is legendary Notre Dame coach Knute Rockne. Many consider Rockne’s issue the second most sought after card behind Nagurski. The Rockne is very popular, even in low grades. Nagurski and Rockne aren’t the only great names in the set. Clark Hinkle, Turk Edwards, Cliff Battles and Ken Strong are just a few of the Hall of Famers in the set.

Hinkle was the versatile leader of the Green Bay Packers, as a fullback on offence and a linebacker on defense. He would challenge Nagurski head-on, even running over him and breaking his nose one occasion. In addition to his offensive skills rushing and receiving, he also was the Packers kicker and a very reliable defensive linebacker.

Turk Edwards was an iron man, playing on both offense and defense. Edwards continued to stand out long after the Boston Redskins had become the Washington Redskins, but almost unbelievably, the seemingly indestructible Edwards was injured at a coin-tossing ceremony prior to a game against the New York Giants in the 1940 season. After calling the coin toss and shaking hands with the opposing team captain, Edwards attempted to pivot around to head back to his sideline. However, his cleats caught in the grass and his oft-injured knee gave way, bringing his season and career to an unusual end.

Cliff Battles was known for his versatility, but in an era of three yards and a cloud of dust football, he was more flash than force. He only played 6 seasons due to contract squabbles, but excelled in rushing, receiving, returning kicks and on defense.

Strong, a two-way force for the New York Football Giants most publicized performance came in the 1934 National Football League Championship Game. In that now historic game, Strong contributed 17 points on two touchdowns, two extra points and a field goal to lead his New York Giants to a 30-13 victory over the Chicago Bears. That was the game the Giants resorted to the use of sneakers instead of cleats on the ice-covered Polo Grounds field to upset the previously unbeaten Bears for the title.

Shipwreck Kelley is another interesting card as he was the player-owner of the Brooklyn Dodgers was one of the last helmetless players to play in the league.

Just Collect, Inc. is always looking to purchase 1935 National Chicle Football cards and other vintage baseball, football, basketball and hockey cards. Our staff of well informed, customer service representatives are ready, willing and able to help you with any sports card questions that you may have. Additionally, Just Collect’s experienced sports card specialists can answer most of your detailed or specific questions.