Ask any basketball fan to name their all-time "Big Three" and you'll get answers ranging from Russell-Cousy-Sharman, to Jordan-Pippen-Grant, to LeBron-Wade-Bosh. But ask the same question of a basketball card collector and the answer is universal, it's: 1948 Bowman-1957 Topps-1961 Fleer. First, last and every time in between. The reason being is that this trio of offerings comprise the entire vintage basketball market. You read that correctly. The entire vintage basketball market! Sure there were a few minor regional issues released throughout the era spanning the 1950s and 1960s, but for the purposes of collecting and future investment, those productions remain as immaterial as one of Wilt Chamberlain's missed free throws during his 100-point outpouring against the Knicks that same season.

Of this Hoops Holy Trinity, the 1961 Fleer set stands out for a number of reasons, the first of which being it's outstanding layout. The 66 standard-sized, 2-1/2" by 3-1/2" cards boast vibrant fronts with 1960's style color combinations and mid-century design notes that period became famous for. Broken into thirds, the top portion held the team name in logo, the middle was the player's name and position, and the bottom, the best piece of real estate for a crisp, close-up portrait of the the player himself. On the much more subdued flip-side are the previous year's stats along with a player bio and another small burst of blue color to frame the card number. The first 44 cards of the set are regular player cards, with the final 22 being "In Action" specimens featuring a number of stars and Hall of Famers that previously appear in the core group. It was intended for these cards to be ordered alphabetically according to there type (A-Z for standard set cards and A-Z for "In Action" cards) but those familiar with the issue know that there were some hiccups ("Arizin" should come before "Attles") but hey, nobody is perfect.

As attractive as these cards are though, we all know that a pretty face will only get you so far. We need substance to go along with style, and this set does not disappoint! The rookie cards of Wilt Chamberlain, Jerry West and Oscar Robertson, with each man's lower-numbered portrait entry revered as his true rookie piece, and their second “In Action” card, anchor this sensational group; while deeper down we incredibly find a pair of cards each from legends Bob Cousy, Tommy Heinsohn, Len Wilkins, Clyde Lovelette, Bob Pettit, Dolph Schayes, Jack Twyman, Sam Jones, Walt Bellamy, K.C. Jones, Tom Gola and Hal Green, with several of those Springfield residents making their card debuts as well. Bill Russell's cards #38 and #62, while not his rookies, are significant as this release marks only the second and third time (his 1957 Topps card was his first and is considered his true rookie card) the Boston Celtics great, despite his eleven rings, would ever grace a card front. And we can't leave out Elgin Baylor's rookie card. 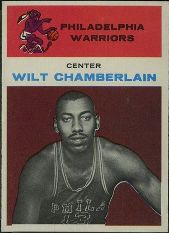 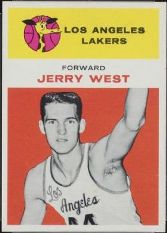 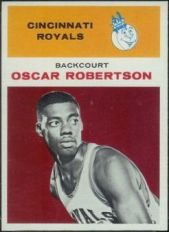 Despite his inclusion in the Hall of Fame, it's been the opinion of a growing many that his influence on the league has long been underrated. That vocal minority has backed this view with hard currency and there have been a number of bidding wars recently fought over a high-grade specimens starring the Lakers former wingman.

Unlike the other members of the Big Three, the 1961 Fleer set’s 66-card count meant that the product rolled off the production line in equal quantities, leaving the collecting endeavor free of "Short Prints," "High Numbers" or variations. That doesn't exclude it from basic laws of hobby though. As with any vintage sets, the first and last cards are always condition rarities - it's the price they paid for protecting the group and baring the brunt of the unforgiving rubber band. In this case that would be #1 Al Attles and #66 Jerry West (In Action). That being said, even those cards that managed to survive the decades unscathed cannot be counted on to return sure-fire high grades once they're submitted. Centering was a major issue during manufacturing and lead to a shortage of precisely framed pieces. The ripple effect has caused even the price of the most common players found in the set to skyrocket due to short supply and overwhelming demand from "high-grade" collectors.

Contact Just Collect, Inc. To Sell Your Set Or Collection

Bottom line is the market for vintage basketball is red, red hot and there has never been a better time to cash in on your cards. If you're fortunate enough to be holding any piece, pieces, or complete set of 1961 Fleer, then our experts our eager to hear from you today. We're paying top dollar for quality cardboard and offer consignment arrangements for those who would prefer to go that route. Our satellite offices throughout the country are easily accessible and for the right collection, we're willing to come to you. Call today to discuss your options.