The 1933 Goudey baseball card set was the most important set issued during the 1930's, and also quite a leap of faith.

As the printing presses were beginning to produce these cards, the United States was in the worst part of The Great Depression. Issuing any new item was challenging. Many collectors simply did not have the few extra cents needed to buy these chewing-gum packs. At the beginning of 1933, many U.S. Banks were failing. There was a four-day bank holiday so our financial institutions could regain footing.

Into all this came the Goudey Card Company and their 1933 baseball card set. This set, which would conclude with 240 cards (239 printed in 1933 and one in 1934) featured many of the best players of the day, some of them in multiple poses.

Today, there have been more than 82,000 total 1933 Goudey cards graded. Approximately 13 percent of all those cards graded are PSA 7 or better with no qualifiers. We can only wonder how many cards would have survived without moms throwing them away and the World War II paper drives. Each card in the set has at least five copies graded PSA 8 (NM/MT), meaning there is the possibility that several collectors can accumulate a super high quality set.

Goudey scored a major victory by prominently featuring George Herman "Babe" Ruth. Any set that included "The Sultan of Swat" aka "The Great Bambino" already had a major leg up on gaining acceptance.

During the early days of the depression Ruth was asked why he earned more than the President of the United States. He replied, "I had a better year than (Hoover) did." Anyone who made that much money and was that popular with fans was a great starting point for a set. The creators of the 1933 Goudey set did not disappoint and printed four different Babe Ruth cards (numbered: 53, 144, 149 and 181).

Of the four, the most difficult to find is card number 53, while card number 144 is considered a double print. All four cards have interest among collectors. The same photo used on card 181 was also used in the 1935 Goudey 4 in 1 set.

The PSA Pop Report supports the long-held theory that card #144 was the most produced Ruth card. Of the four, number 144 is the only one with more than 1000 total cards graded, and also has the most cards graded PSA 7 (Near Mint) or better with no qualifications.

There is a PSA 10 (Gem Mint) card graded of card number 181, and card number 53 has significantly fewer cards in these high grades than the other three cards. 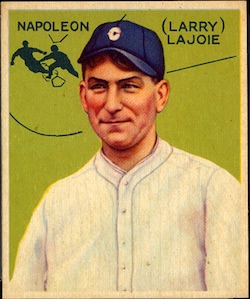 In addition to Ruth, one of the most important aspects of the 1933 Goudey set was an infamous marketing ploy and something never seen in a set this large. Over the previous decade, there had been several baseball card sets that issued one particular card in a super short print, with very few copies hitting the market.

In 1923, the Maple Crispette company produced almost no Casey Stengel cards and about a decade later U.S. Caramel issued almost no Freddie Lindstrom cards. It made getting prizes from the card manufacturers for collecting the whole set very difficult and it encouraged collectors to buy more packs.

But Goudey took the missing card idea to a whole new level for the 1933 set by never issuing a single example of card #106 during the year.

Some collectors actually wrote the Goudey Card Company to complain. Their letters were rewarded when Goudey finally sent them the long awaited card #106 in 1934. Card number 106 ended up being Nap Lajoie, a major star in the earliest part of the 20th century.

Because most of the Lajoie cards were sent with paper clips in the mail, many examples still show paper clip indentations.

Other 1933 Goudey Hall of Famers

We have looked at the two key players in this set but there are plenty of other Hall of Famers included. In fact, more than a quarter of all the cards in the set picture Hall of Famers. They include people who had been involved in baseball for a long time, such as Tris Speaker, and two cards of Henry Louis Gehrig, the other half of what was the most devastating home run combination. With this many future Hall of Famers, collectors were kept interested throughout the 1933 print run.

Cards numbered 1-52, with a couple of exceptions, are considered more difficult to acquire than the rest of the set, and most of the final cards of this set feature members of the New York Giants, who defeated the Washington Senators in the 1933 World Series.

If you look at the text on the Carl Hubbell #234 card, the back blurb mentions both Hubbell's winning of the 1933 MVP award and his two World Series wins that year. Thus like many other sets, the 1933 Goudey set could be considered a "living set" as back texts were mentioning recent developments.

Looking back, the Goudey Card Company succeeded in rekindling collector interest with this important set produced in wax packs and featuring a piece of gum. For those collectors who grew up with Topps and Bowman cards, the idea of putting gum in the packs began with Goudey and we all owe the company a major thank you for our future collecting.